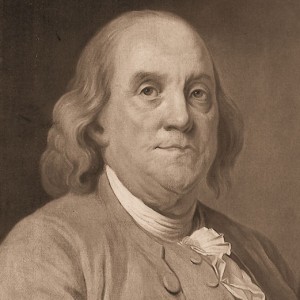 When people think of early retirement I think there are many misconceptions. The first being that when you are retired you are not allowed to do anything productive and the second is that the concept of early retirement is a new concept. In attempt to debunk both of these myths I would like to put forth the case of one of the United States of America’s founding fathers, Benjamin Franklin.

While it is true that Benjamin Franklin was born to the world of milk and honey, it didn’t help him as much as you think it would. The street he was born on was called Milk Street and his parents were candle makers. So, basically the Franklins were never much for money. That isn’t to say the Franklins were poor, but they were very solidly middle class.

The way to a job back then was an apprenticeship and so at age 12 he took an apprenticeship with his older brother as a typesetter for the The New-England Courant. He was a good apprentice typesetter but what Benjamin Franklin really wanted to be was a writer. Unfortunately his brother James wasn’t having it so Benjamin Franklin started writing a new article for the paper under the name of Mrs. Silence Dogood. The Dogood letters were an instant hit and everyone started to wonder who this wonderful middle-aged widow was and how was she so up to date on the going on of Boston, Massachusetts, but yet no one had ever seen Mrs. Silence Dogood at any local parties. It took awhile but eventually James found out that Benjamin had him fooled. Despite the popularity of the letters James was enfuriated with Benjamin Franklin and Benjamin Franklin was forced to flee to Philadelphia, Pennslyvania.

In Philadelphia Benjamin Franklin was bound and determined to make his own way. After a few setbacks with the governor sending him to England he eventually started his own paper called the Pennsylvania Gazette. Business was good and business grew. He eventually started papers in all of the colonies and soon over 80% of all communications was handled by Ben Franklin, and people thought William Randolph Hearst was a media mogul! By 1748 there was enough revenue coming in that Benjamin Franklin at the age of 42 could retire.

So did Dr. Franklin take his bifocals and just pass the time in a rocking chair? No of course not! Free from the constraints of a daily job Dr. Franklin progressed in many areas. He was the leader of the local Masons, an emissary, a volunteer fire marshal, a scientist, oh and there was that whole creating a new country called the United States of America. Benjamin Franklin is the only person to have signed the Declaration of Independence (1776), the Treaty of Alliance with France (1778), the Treaty of Paris establishing peace with Great Britain (1783) and the U.S. Constitution (1787). Doing all this took time, time that if he was weighed down by a job I doubt he would have been able to do.

A penny saved is a penny earned – Dr. Benjamin Franklin

What do we learn from Benjamin Franklin? He worked hard and he knew that the number one key to building wealth was saving. Benjamin Franklin did many things but he always kept an eye on his saving. He often said that he wasn’t afraid of being poor but said that being ashamed of being poor was a shame. He constantly learned and as he did bought his freedom and eventually some for every one who is now US citizen. It was no wonder he also invented paper money and the most popular US bill bears his image.